Cutting IT costs now will only cost you more in the future: Part 2

Technology has become ubiquitous across all business functions and is critical for success.

However, as we discussed in a previous blog, many business leaders hold the outdated view that IT is a cost centre, and are blind to its potential to drive growth and business performance. And as technology becomes more available ‘as a service’ and its cost decreased, IT is being regarded and managed as a commodity.

Technology may be more essential than ever to society, but from a business leadership standpoint, it becomes invisible. As a result, when resources are tight, technology spending is often the first thing to be cut . The unwillingness to invest in IT and stress to cut IT costs can cause CEOs to make decisions that prove to be far more costly in the long run in terms of lost dollars and lost business opportunities.

With the advent of the cloud, IT components such as servers and storage have become commoditised, but for business leaders to dismiss them as such “is a mistake” according to McKinsey & Co. In an article titled ‘Where IT infrastructure and business strategy meet’, the authors explain that “…an effective infrastructure operation creates value by making sound choices about which technologies to use and how to integrate them.

A technology product purchased from a vendor may be a commodity, but the ability to bring together hardware, software, and support to provide the right combination of cost, resiliency, and features for a new application isn’t.” The article cites real life examples of organisations using IT infrastructure and digital technologies to increase efficiency, employee productivity, and speed to market, improve customer experience, and even redefine their business models.

The danger of viewing IT as a commodity is that it results in an inability to align technological resources with business objectives, preventing organisations from seeing real business gains. A weak IT strategy can be costly and wasteful, especially for resource-constrained SMBs. It also limits agility, meaning organisations aren’t able to respond to changing business requirements rapidly enough. The absence of strategic thought causes organisations to be reactive, forcing them to work in a constant state of catch-up.

In most businesses, IT budget approval – if there is an IT budget at all ­– occurs at the CFO or CEO level. Yet, according to a Tech Pro Research survey conducted in August of last year, those approving IT budgets are focused on the return on investment and total cost of ownership (TCO) projections for the IT projects that they are considering for approval. This highlights the cost saving attitude, and when business leaders look solely to the IT function to find savings, the results are often limited. In fact, as an Economist Intelligence Unity survey of 536 business leaders found, organisations that recognise the value of their IT resources perform better in their markets. Of the 37% of CEOs who said they had a business-driven IT strategy, 47% said their company financially outperformed the competition. On the other hand, among the 20% of respondents who said the CIO had no role in business strategy, only 28% said they were performing better than industry peers.

In some cases, cutting IT spending can have dire consequences. Common IT victims in budget cuts are risk mitigation aspects of IT and IT disaster recovery. As one IT leader said to CIO Magazine, “Too many times I've seen [business continuity] initiatives slashed upon budget review, only to haunt executives months later and cost the company many ‘factors of ten’ more than the original budgeted project. Just because you have never experienced an IT disaster, does not mean you wait for one to prove the need for disaster planning and business continuity.”

While spending more on IT won’t automatically boost profits, smarter, more targeted investments will. In a January 2016 article, ‘Spend wisely, not more, on IT’, McKinsey & Co cites recent research into the banking sector, which found that, while the amount spent on general application development did not impact banks’ bottom lines, investments in areas of IT functionality, such as automation in customer analytics and big data, correlated to higher profitability.

To many SMB leaders, IT is a cost centre rather than a business enabler. As a result, they are reluctant to recognise and support the role technology can play in business transformation and growth. With technology becoming increasingly commoditised, some organisations are investing in IT, but without an understanding of how it fits into the context of what their business is trying to achieve, these investments are made in vain.Regardless of what size your business is now, a comprehensive IT strategy can help to reduce long term IT costs, increase efficiency and effectiveness, rule out the myriad of options that aren’t part of your focus, and help your team set goals and focus on the future success and profitability of your organisation. Executives should spend smarter – not necessarily more – on information technologies. For those whose core business isn’t in IT, consultancy with a technology partner is usually the best option.

To understand more about IT being key to business success download the ebook, “Why your companies IT strategy is Key to business Success.” 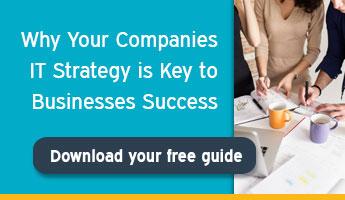 We’re creating a business that provides unlimited potential for our team. We believe that each and every team member has an equal opportunity to play a strategic and impactful role.